Excel Green Triangle Errors – what do these mean?

Excel green triangle errors – have you ever come across these errors/notifications before? Watch the video to learn more

This week’s hint and tip is on Excel green triangle errors. This blog is to help you understand a little more about the little green triangle which sometimes appears in cells. These aren’t really covered in our courses so we decided to do a hint and tip on them. We are going to go through four examples of them now below.

Below you can download a worksheet which can be reviewed whilst watching the video. A screenshot of the worksheet can be seen below.

In cell F3 we have an occurrence of an unlocked cell.

By pressing the arrow next to the yellow diamond, you can lock the cell. 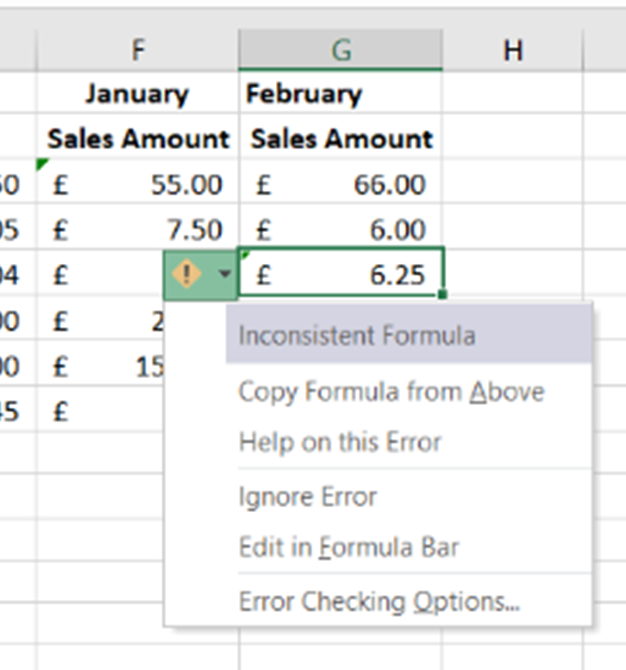 In this example cell G5 contains an inconsistent formula compared to the other formulas in column G.

It’s actually incorrect but again the yellow diamond gives you an opportunity to correct it by copying into the cell the formula from the correct cell above. 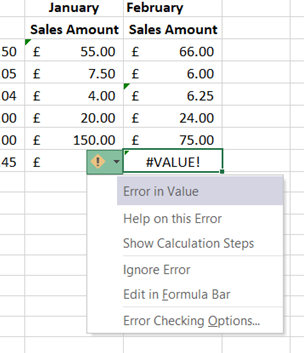 In this example there is an error in the formula since a number is being multiplied by a word.

The Error in value indicates this so can step through the cells (show calculation steps) to correct it. 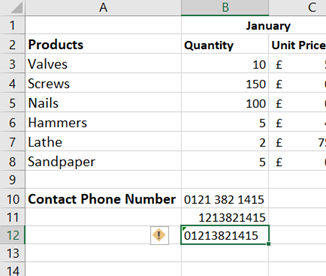 In cell B12 I wanted to type in a phone number with a sting of numbers but it would normally miss out the leading zero (as in cell B11).

So to prevent this happening I can use an apostrophe before typing the number which converts the cell to text and shows the whole number ‘01213821415.

We hope you find these explanations helpful so you are not too worried in future about the errors you may come across with the ‘little green triangle’.

The video below shows you the reasons for the four examples of errors/notifications. Some of these you might know already but some you might not!

Take a look below at the video to find out more and then try them out on your own computer!

Click on button to the right to download the example spreadsheet shown in the video to try it out yourself!

We hope you have enjoyed this hint and tip on Excel green triangle errors. Why not take a look at our previous video hint and tip on the RANK and XLOOKUP functions in Excel?

For more information on Excel understanding visit our website blogs or attend one of our virtual or onsite courses.