Excel 2013 and onward! New features that have arrived with Flash Fill

Flash fill is a great feature that was brought in as a new feature with Excel 2013. This feature allows you to bring together 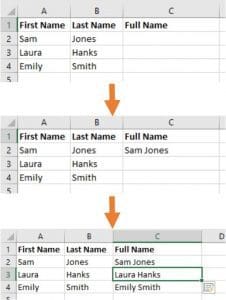 the contents of two cells from two different columns and put them together in one cell in the next column along.

How it can be used

A good example is using it on lists of peoples names. You can take two columns with peoples first and last names and using flash fill create a third column with their full name in it.

From when it first came out in 2013, Flash fill has developed and become even more useful for use in your work. We are going to have a look at some of the options that you can use it with.

When using Flash Fill in Excel, there has to be a consistent pattern in your data that Excel can recognise. As well as this the column(s) that you are using to combine or split up have to be next to each other.

A key thing to remember is that to use Flash Fill, you need to type in one combined or split up ‘answer’ and then in the cell underneath that type in Ctrl+E and it should have then filled in the rest!

Below is a spreadsheet that you can try out Flash Fill! There are four examples for you to try out with some help information on each sheet.

Flash Fill is available in Excel 2013 and other later versions, so if your version of Microsoft Office is older than 2013, you won’t be able to use Flash Fill unfortunately.

Let us know what you think! If you have any thoughts on Flash Fill, please do email us as we love to hear what people think of our hints and tips!

You can email your thoughts to us at johnlegge@jplcomputer.co.uk